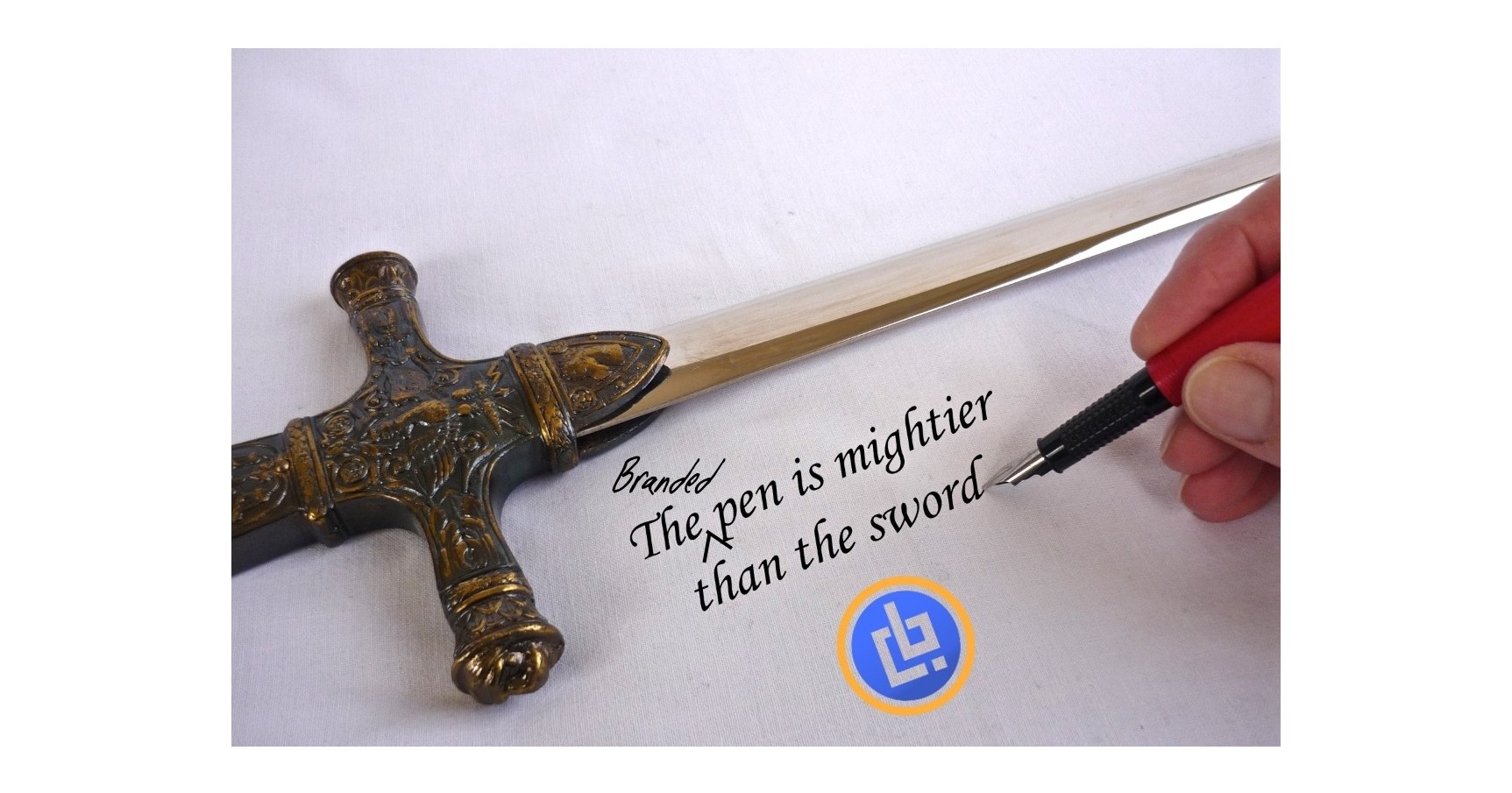 A Pen With a Logo is Mightier Than The Sword

Something About Everything 0 Comments

When it comes to writing instruments, one is quick to overlook the importance of something so small and seemingly insignificant like a pen, without realizing the big role that it plays in bringing forth, representing or materializing an idea. It is clear, though that modern man is slowly realizing the importance of the pen and the written word.

The saying “the pen is mightier than the sword” has been debated about for long, but at IB of course, no energy will ever be wasted on claiming the opposite. So, lets brake up these two a bit and judge for ourselves. Remember, everyone is entitled to their own opinion, this is just how we see it and support the pen.

The sword is representative of force and oppression, that is resorted to when convincing with arguments clearly fails. It’s an immediate weapon of intolerance and irrationality, not to mention incapability of one’s mental potential in solving a problem without violence. Throughout mankind’s history it is clear to which side the scale has tipped in favor of. We can all be the judge in this, for war has been a big part of our lineage and human evolution.

The pen has proven to be able to influence the psyche of society. Magazines, journals, social sciences, politics, books etc. all help to shape the destiny of people, laying down the codes of conduct for the rest, where following this can create a society that can lead to harmony and peace…for we strongly believe that peace leads to progress.

Let’s go on in a little further, shall we? Not like Alice thru the rabbit hole, but opening our minds to change, whether it be logic to some or nonsense to others.

It all starts with a thought. Everything that’s been made by man, all around us we can see someone’s thought or idea that was given its existence by adding an actual deed. The deed being the action taken, in making something that started off in one’s mind, not visible to the naked eye, and then being turned into something that forms a shape or pattern and representing what the idea or train of thought was in its actual existence.

So, let’s start a journey into this complex, yet efficient way of distinction between primitive and innovative human nature, for any evidence of a human culture that were without writing, is leading us to the realm of prehistory.

A sculpture or piece of painted art is a good example of someone creating something that did not necessarily exist other than in the mind. We can even look to some of man’s inventions, like the automobile, if it was not a desire of someone to be capable of riding and driving a “horseless carriage”, we would not see cars or other types of machine driven vehicles for that matter, because only when the thought of this came into existence, did the possibility of it as a creation begin. Think about it. All great inventions came from a desire to make something easier, more usable or something new, going beyond all logic and norm of the current world in its existence. Writing, however, plays a very big part in this, for its able to put one’s idea or thought onto something concrete and lasting, turning it from a mere legend or passed on way of thinking, to an actual written account, whether it’s a factual or fictional one. Now we can get to where and what’s to write on or in, for if you would draw on sand on a beach, it will only be a matter of time before the thought or idea as a written documentation is wiped clean by the waves, giving that peculiar thought only a short time of being, so what platform you use to write on, determines the strength of its enduring expectancy, for equally important to this, is what to write with. Take the Rosetta stone for example. Written in Greek, ancient Greek and Egyptian hieroglyphics. The latter, unknown to the world until this remarkable stone could be studied, because the three “pieces” that was written on it was presumed to be the same words, only documented in these three different ways.

That is why it was decided to write something about the instruments that is used in putting one’s thoughts or accounts on something with a more lasting ability. When looking at writing instruments, it was decided to go I little deeper into “why” and “how” this instrument became such a vital part of our history and future, as writing has been a way of communication that’s one of the biggest and most influential aspects of our human nature. A method used in our daily lives and a skill that we will pass on for generations to come, because never has there been a better way to pass on knowledge than this. Sure, a lot of cultures that still exists today, don’t make use of this method and still only use their language and some drawing capabilities to tell the tales of their history or to make sure the following generations will carry on in their traditions and ways of life. This primitive way of life has its own major downfalls in the sense of creating folklore or legends, because without any documented written account, there is no sure way of knowing if anything really occurred.

Particularly a medium of human communication representing language and emotion using signs and symbols, writing has been a tool of man that relies on many of the same structures as speech, like vocabulary, grammar and semantics, with a system of signs and symbols. In history we can go as far back as the Mesopotamian age, where the use of clay “tokens” were used in approximately 8000 BC. Conventional history still assumes that the writing process first evolved from economic necessity, because of political expansion in ancient cultures. In the 4th millennium BC, the complexity of trade and administration outgrew the power of memory, and writing became a more dependable method of recording and presenting transactions in a permanent form, which brings us to the instruments used throughout the world in history. From chipping tools to feathers and ink pens, the evolution of the instrument we write with has only been aiming at the effectiveness and usefulness to the user. So putting comfortability and design aside, we should not forget the actual purpose, which is to give form, life and creation to our ideas.

So, with our short journey coming to an end, we invite you to browse thru our wide inventory of available writing instruments, keeping in mind the big role it plays in our daily lives, for we at Inter-Branding are firm believers that the Pen will always be mightier than the Sword.

All fields are required

Looking for something specific? Cant see it on our site? Then Just... Contact Us